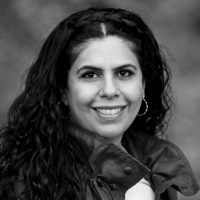 “Each photograph I take is like a part of my soul, and I’d like that to outlive me.”

She has documented social groups like the oil men and women of Saudi Arabia in her project, If I Forget You Don’t Forget Me, and has addressed the impact of mass media on propagating intentional erasing of identities in her project Crash, highlighting the unnamed Saudi teachers dying in car crashes across Saudi Arabia. Her participatory projects have attracted hundreds of women to use art as a new platform to address social injustice like Tree of Guardians, Esmi-My Name, and Suspended Together.

In 2014 she was a recipient of a research Fellowship from NYU AD and was invited in early 2015 to the Robert Rauschenberg Residency in Captiva, Florida. Manal has shown her work in Prospect 3 New Orleans – The American Biennale (2014/15), in collateral shows at the Venice Biennale (2009/11), and at Museums around the world like Gawngju Museum in South Korea, Louisiana Museum of Modern Art in Denmark, The Victoria and Albert Museum in UK, and Mathaf Museum of Modern Arab Art in Qatar. Her art works are part of public collection at the British Museum, LA County Museum, Louisiana Museum, and Mathaf.

Manal was born and raised in the Eastern Province, the heartland of the Saudi oil industry. She has had a varied and non-structured educational background in photography, studying first in Saudi Arabia, then Dubai, Bahrain, and London. In 2010, AlDowayan was a resident artist at Cuadro Fine Art Gallery in Dubai, and in 2011, she was a resident artist at The Townhouse Gallery in Egypt. She is currently part of the British Council International Cultural Leaders programme.