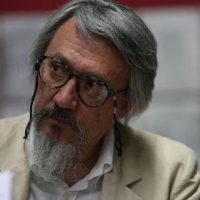 Manuel Marín was a Spanish artist and sculptor celebrated for his vibrantly colored, asymmetric mobiles in the manner of Alexander Calder, twentieth-century American artist who created kinetic sculptures that were carefully balanced to achieve suspension in the air. Compared to Calder, Marín’s works are structurally robust “without diminishing their elegance and poised equilibrium.”

Initially trained as a bullfighter, Marín pursued art at age twenty, traveling to London and serving as assistant to English bronze sculptor Henry Moore. His tutelage under Moore and exposure to modern British sculpture likely encouraged the budding artist to use the medium. In 1964, Marín worked in New York as an art restorer at Mallorca Brothers Gallery. He eventually opened his own business called The American Indian Art Gallery, where his important clients included modern artists such as Andy Warhol, abstract expressionist Willem de Kooning, and neo-expressionist, graffiti-style painter Jean Michel Basquiat. His first exhibition was at the Allan Brown Gallery in Scarsdale, New York, around 1970. Marín completed his sculptures at the Eastman Studio, a workspace that is part of the MacDowell Fellowship in Peterborough, New Hampshire. His mobiles are featured in various galleries and considered to be in high demand at auction houses.