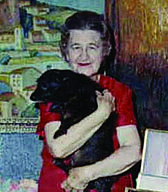 Painter, sculptor and print maker Marie Atkinson Hull was active in and around Jackson, Mississippi until her death in 1980. She was a revered and influential figure in Mississippi and generally in the South. In 1975, the Governor of Mississippi proclaimed “Marie Hull Day” because of her impact on art in that state. Hull was also a writer, and taught music and art.

In 1890, she was born in Summit, Mississippi, a small town within 80 miles of Jackson and 120 miles of New Orleans, so she had early exposure to the fine arts of both of these towns. Her family was cultured and had roots in that state for generations back. At the age of four, her family took her to hear Polish pianist Jan Paderewski in New Orleans, and this was a life-long inspiration for her. She studied music at Bellhaven College in Jackson. However, art took over as her major interest.

Her first art teacher was Aileen Phillips of Jackson, who had studied at the Pennsylvania Academy of the Fine Arts. In 1912, Marie enrolled in the Pennsylvania Academy and the teachers who made the greatest impression on her were Daniel Garber and Hugh Breckenridge. She returned to Mississippi and taught at Hillman College, and in 1915, she left that institution and began a life-long career of teaching art out of her home. In 1917, she married architect Emmett Johnston Hull, and she assisted him with architectural drawings.

She also traveled extensively around the United States and studied at the Colorado Springs Fine Art Center with Robert Reid and John F. Carlson. In 1922, she enrolled at the Art Students League where her teachers were Frank Vincent Dumond and Robert Vonnoh. She traveled in Europe under the tutelage of George Elmer Browne which included sketching and studying in France and Spain, and ultimately in Morocco, Canada, and Mexico. Her works reflected her interest in exotic locales, rich coloration, and varied architectural forms.

Paintings like The Brick Pile and Red Bluff are examples of expressions of her feeling for fiery color and painterly realism combined with emotional expression and sophisticated design awareness. Hull, however, was open-minded and experimental, ever-exploring materials, techniques and abstraction.

Her work is in the collections of the Mississippi Museum of Art, Jackson; Southwestern Texas Normal School; Witte Memorial Museum, San Antonio, Texas; and the Mississippi Art Association. 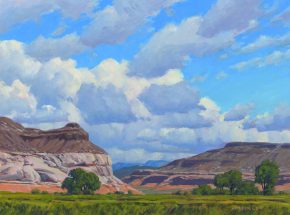 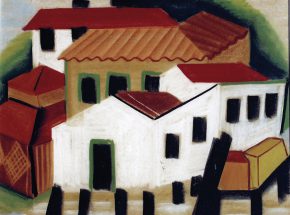