Visual artist Marilyn Nance has produced exceptional photographs of unique moments in the cultural history of the United States and the African Diaspora, and possesses an archive of images of late 20th century African American life.

A two-time finalist for the W. Eugene Smith Award in Humanistic Photography for her body of work on African American spiritual culture in America, Nance has photographed the Black Indians of New Orleans, an African village in South Carolina, churches in Brooklyn, and the first Black church in America. She is recognized by the Smithsonian Institution Center for Folklore Programs & Cultural Studies as a community folklore scholar, an individual who has shown a significant contribution to the collection, preservation and presentation of traditional culture in a community or region. Her work can be found in the collections of the Smithsonian American Art Museum, Schomburg Center for Research in Black Culture, and the Library of Congress.

A graduate of New York University’s Interactive Telecommunications Program (Tisch School of the Arts), Nance is an African American digital pioneer; she created her “Soulsista” website in 1994, was one of the Internet’s first radio disc jockeys in 1996, and in 1998 produced an interactive web site based on an African divination system. Nance served as the Curator of Photography for the Digital Schomburg Web Project, selecting for Internet publication, over 500 images of 19th century African Americans, from collections of the research libraries of the New York Public Library. Additionally, Nance holds a B.F.A. in Communications Graphic Design from Pratt Institute, and an M.F.A. in Photography from the Maryland Institute College of Art. 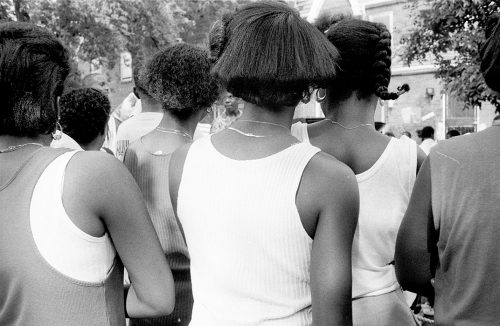 Marilyn Nance, A Rap Performance, Queens, NY, Photo printed on gatorboard, Overall: 20 × 30in. (50.8 × 76.2cm), Courtesy of the artist and MFON: Women Photographers of the African Diaspora