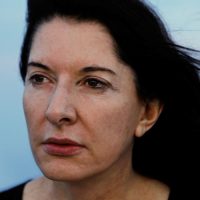 A pioneer and key figure in performance art, Marina Abramovic uses her own body as subject, object, and medium, exploring the physical and mental limits of her being. Abramovic’s prolific caree spans over four decades of interventions and sound pieces, video works, installations, photography, solo performances, and collaborative performances.

Characterized by endurance and pain—and by repetitive behavior, actions of long duration, and intense public interactions and energy dialogues—her work has engaged, fascinated, and sometimes repelled live audiences. The universal themes of life and death are recurring motifs, often enhanced by the use of symbolic visual elements or props such as crystals, bones, knives, tables, and pentagrams. While the sources of some works lie in her personal history (the circumstances of her childhood and family life under Communist rule in the former Yugoslavia), others lie in more recent and contemporary events, such as the wars in her homeland and other parts of the world.

Born in Belgrade, Serbia, she moved to Amsterdam in 1976 and has lived in New York since 2001. Her pioneering works of performance art have made her the subject of numerous solo and group exhibitions worldwide at institutions including Kunstmuseum and Grosse Halle, Bern, Switzerland and La Gallera, Valencia, Spain (1998); Solomon R. Guggenheim Museum, New York (2005) Museum of Modern Art, New York in (2010); the Garage Centre for Contemporary Culture, Moscow (2011); Kunsthalle, Vienna (2012). Abramovic’s work was also included in Documenta VI, VII and IX (1977, 1982 and 1992); Venice Biennale 1976 and 1997, with the exhibition of Balkan Baroque in the latter earning her the Golden Lion Award for Best Artist. Abramovic lives and works in New York City. 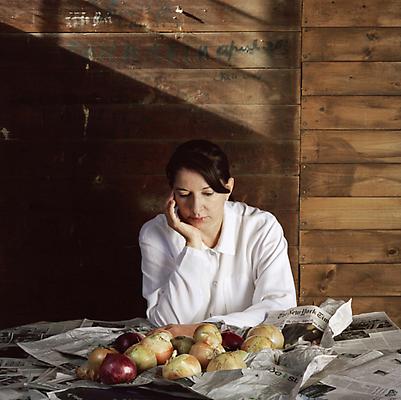