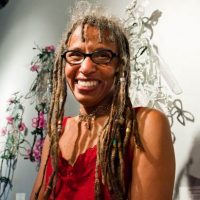 MARITA DINGUS was born in Seattle WA in 1956. She attended Tyler School of Art at Temple University in Philadelphia (BFA, 1980) and San Jose State University (MFA, 1985). Dingus currently lives and works in the state of Washington. She received a Visual Art Fellowship from Artist Trust (1994), a John S. Guggenheim Fellowship (1999), and the Morrie and Joan Alhadeff PONCHO Artist of the Year Award (2005).

Dingus has had solo shows at Henie Onstad Kunstsenter and The Stenersen Museum both in Norway (2002, 2006) and the Museum of Glass in Tacoma WA (2005/6). Her work has been included in Nature/Culture organized by The Society for Contemporary Craft in Pittsburgh (2006-8), Outwin Boochever Portrait Competition at the National Portrait Gallery in Washington DC (2006/7) and 21st Century American Women Artists at the Residence of the United States Ambassador to NATO in Brussels, Belgium (2006-10). Her work is in many regional museums and corporate collections. Dingus has been represented by Francine Seders Gallery since 1991.