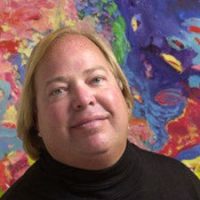 Mark Dorman, from his earliest years, has expressed his talent as a visual artist, particularly his color sense. Born in London, England, Mark Dorman became a world traveler with his father who served as an American diplomat. Dorman’s horizon was expanded and he developed artistically as a result of all of the foreign posts where his father served, including Egypt, Sudan, Iran, Zambia, Zimbabwe, and Thailand. His inclination to paint came at an early age. In fact, one of his early murals probably remains on the walls, perhaps under a coat of paint, in a home in one of the many foreign capitals in which he lived.

Dorman attended a French school in Egypt, a British boarding school in Zimbabwe, and graduated from St. Stephens School in Rome. It was in Rome that his art career was sparked by his classes with Manlio Guberti, a world- renowned Italian artist. Manlio Guberti helped to engender in Mark Dorman a true love of the painting process. Upon his return to the United States, Dorman attended Emerson College in Boston, and expanded his interests from painting, to acting to journalism — hence; he excels at acting and art criticism as well. He later wrote art criticism for the New Art Examiner and Washington View magazine. Mark Dorman worked and painted in Iran , where he also wrote art and film criticism, and in France, Dorman worked as an actor in film and theatre while attending classes at Atelier, La Grande Chaumiere, in Paris. Upon his return to the United States, Mark Dorman completed an MFA from Catholic University. The continuation of his career as an artist was fulfilled by his studies at the Corcoran Museum School with Brockie Stevenson, at the Maryland Institute for the Arts in Baltimore, and by his apprenticeship with Leon Berkowitz, an internationally renowned artist and one of the founders of the famous “Washington Color School” of painting. Mark Dorman has been formally exhibiting his work since 1986, receiving numerous prizes for juried shows. He now exhibits throughout the United States, and has sold his work internationally to prominent individual collectors.

In his years of working as a consummate artist, Mark Dorman has perfected his skills in several genres of painting, and has not confined himself to one medium. He has used pastel, gouache, watercolor, Chinese ink, gold leaf, and oils in some exquisite abstracts and landscapes. Mark Dorman has a substantial body of abstract work in which he has discovered a language of calligraphic symbol and through amorphous and concrete shapes; he has expressed a visual affirmation of his dreams. Bill Dunlap, the art critic for Washington D.C.’s WETA program “Around Town,” characterized Mark Dorman’s landscapes as contemporary impressionist. Mark uses nature’s content and endows them with a uniquely personal and spiritual quality. He translates his emotional reactions to the vibrations of nature’s color and light. He calls his landscapes’ journeys’, where nothing depicted is wholly literal, where something is always hidden in the intention of the image.