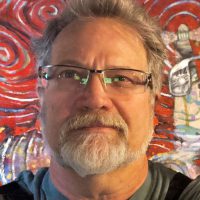 The oldest of three sons and four additional siblings, Nelson’s parents were both Naval Officers who met at a submarine base in the Korean War and traveled extensively until arriving to The Panama Canal Zone in 1970. In Panama, Nelson began his studies in the fine arts at the Canal Zone College, Universidad National de Panama, INAAC, and Escuela Nacional de Artes Plasticas. Mark Nelson returned to the United States to complete a BFA from The School of the Art Institute of Chicago and an MFA University of Illinois at Chicago. Following graduate school, his professional work was realized through residencies and a profound series of interdisciplinary projects exploring inequity, justice, cultural isolation, and economic oppression. While his early artwork in Panama was influenced by the politically and socially charged arena of a 1970 – 1980’s Central America, it was Nelson’s move to Chicago that led to the expansion of his media repertoire. Over the years, Mark Nelson has established himself within the city of Chicago as a laboring artist and highly respected educator. Mark is a recipient of numerous awards over the span of his career including a twice recipient of the Illinois Arts Council Fellowship and several lighthearted public art projects as the “Cows on Parade” and Lighthouses on the Mag Mile.” In 2007 the Art in Embassies Program acquired one of Nelson’s paintings titled “Jesus lizard on the Banana Channel.” While seemingly satirical in title this large scale painting was an abstract recollection of fishing for peacock bass in a section of the Panama Canal nicknamed the Banana Channel. While patiently waiting for bass to take their bait, small “Jesus lizards” would dart quickly across the surface of the water close to the bank. While Nelson had been absent from Panama for 13 years, the embassy’s acquisition of his painting resulted in his return on four separate residencies that generated new projects. Mark Nelson’s studio and home is located in Chicago’s historic Pilsen neighborhood where he is part of a large community of Latin American artists.