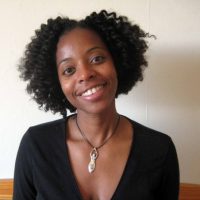 Oakland based activist, Marta L. Sanchez, is a survivor, poet, author, former rape crisis center advocate, and self-taught visual artist. She uses her art to advocate for gender and racial equality and healing for survivors.

Sanchez was born in the Republic of Panama in 1978. She is a graduate of Spelman College (2000), and the University Of Virginia School Of Law (2005). Sanchez began painting spontaneously in December of 1999, and in just under ten years, her artwork has been featured in shows in Austria, Honduras, Panama, Trinidad, and various cities in the United States, including New York and Atlanta.

In 2008, she published a book of short stories, poetry, and art entitled Beauty Unbalanced. She was simultaneously chosen by the National Organization of Women (NOW) to represent the Intrepid Award with her image “A Continuous Celebration of All Things Wonderful,” and by the Museum of Young Art, in Vienna Austria, to represent Panama in an exhibit entitled “Young Art Global.” That year her artwork also graced the cover of the feminist magazine Con-spirando, based in Chile.

A firm believer in collective wisdom, Sanchez has also served on the advisory council for “The Art of Surviving,” a Virginia based exhibit, which shares stories of victimization and healing told through survivor poetry and art.