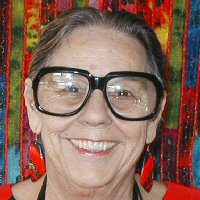 My life has been a wonderful adventure with good times and bad times, full of twists, turns and changes.

I was born on West Market Street in Louisville, Kentucky, in 1924. My father had a second grade education and my mother an eighth grade education. Since my father could not read he did not allow us to read. However he was not home most of the time. I made my first dress when I was eight years old and my first quilt when I was twelve. Five months later the river god destroyed it in the Ohio Valley flood. It was more than 50 years later when I made my second quilt.

I was married at eighteen, had a child at nineteen, and divorced at 20. I was a single mother living in the projects during World War II. I married James Craik after the war and I had two more children. I moved from Louisville in 1947; lived in eleven states, two foreign countries, and moved back to Louisville in 1990. My spouse, Jim, was in the Air Force and I was a traditional mother and homemaker. In the fifties I started my own successful business in home making cocktail dresses, wedding dresses, and bridesmaid dresses.

I earned a Ph.D. when I was 44 years old and began my second career as a university professor. I had been very active in fighting against racism and sexism for many years. In 1976 I filed a class action lawsuit against a state university for all women faculty. After nine years, I won. Part of the remedy was an annuity that provides me with a tax free check every month until I die. I have used that money to establish a scholarship at the University of Louisville for women with preference for single mothers.

Jim had emphysema and was ill for many years. As his primary caretaker I had a lot of time on my hands and started my third career. I had always been interested in art and tried my and at painting. I soon realized that my sewing skills were better than my painting skills and I became a fiber artist.

Jim died in 2004 and I purchased an old building in the art zone on East Market Street and now have a studio, gallery, and apartment. So after moving 22 times in my adult life I am back on Market Street where my life began.