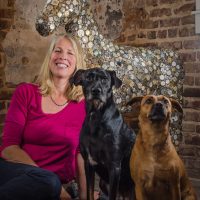 “Thirty-five thousand years ago, the first intentional burials with ritual objects occurred, and with them the first expressions of human faith appeared. Among these objects, a predominant burial image was the animal. The use of ritualized animal images has had enduring religious, mythic, and aesthetic significance. The inherent power of these artifacts and my love for animals have made their image central to my work and philosophy. For me, animals symbolize a bridge between the rational and instinctual worlds.

I sculpt using wire, mesh and hydrocal or clay. The sculptures vary in scale from one to five feet tall, each piece is hollow and unique. The surfaces of the sculptures are covered with epoxy and found objects making them rich in texture. These surfaces refer to human creation, memory, and pattern. African grave markers and old Southern ‘Memory Jars’ have inspired the exterior embellishments. I search for found objects at flea markets and junk stores. Favorite objects are watches, dice, jewelry, keys, porcelain figurines, precious stones, buttons and Milagros. Titles for my pieces often come from charm bracelets, pins, or other objects with etched or printed names. ‘Louise’ is a sculpture covered with lambs, elephants, monkeys, dogs, horses and deer figurines and gets her title from a swan souvenir placed on her paw from ‘Lake Louise.’ A dog sculpture covered with watches has ‘Watch Dog’ in the title, another covered with porcelain birds is ‘Bird Dog’ and ‘Lucky Pup’ is a dog rolling over covered with dice.

Through my work, I aspire to create whimsical animated creatures using gesture and ‘movement’ to capture a presence I feel animals possess. To date, my sculptures have been single figures, gazing in a distinct direction, implying an invitation to play, or to otherwise interact with an implied other. My new body of work uses multiple forms to create relationships between figures and metaphoric possibilities. The animal, as archetype, found in diverse cultures’ myths and fables, whether similar or disparate, is fascinating to me. The sculptures are not meant to represent a single ‘story.’ My Interpretation comes from combining the viewers’ imaginations, belief systems and personal connections to their ‘herd’, ‘pack’, or ‘cub’.

Mary Engel holds a Bachelor of Science degree from Illinois State University, Normal, Illinois (1988) and a Master of Fine Arts degree from University of Georgia, Athens (1993). Originally from Chicago and currently living and working in Athens, GA, her work has shown and been reviewed extensively nationally since 1986. Her work is held in numerous important private collections, as well as institutions including Children’s Healthcare of Scottish Rite in Atlanta, The Arthur Blank Family Foundation, the Detroit Zoo, the Disney Corporation and the President’s Collection of the University of Georgia. Engel’s work has also been presented and received with overwhelming response at numerous important international art fairs, including Pulse Miami, Art Chicago, and ART (212) NY. Museum exhibitions include Macon Museum of Arts & Sciences, Macon, GA, Museum of Contemporary Art, Atlanta, GA, Huntsville Museum of Art, Huntsville, AL, Asheville Museum of Art, Asheville, NC, and Fine Arts Museum of the South, Mobile, Alabama.