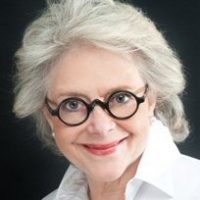 Mary Fisher is an artist, author, and speaker who travels the world advocating for those who share her HIV-positive status. She previously served as ambassador for the Joint United Nations Programme on HIV/AIDS (UNAIDS), and on the Leadership Council of the Global Coalition on Women and AIDS. Her art work has been featured in one-woman and group shows and is found in distinguished private and public collections, including the permanent collection of UNAIDS in Geneva, Switzerland. Her words, photographs and art have filled five books and countless magazine articles, news accounts and feature stories.

She established the Mary Fisher CARE (Clinical AIDS Research and Education) Fund to support long-term, outcomes-based research for the care of people living with HIV, especially women. As part of her commitment to enable HIV-affected women in Africa to support themselves and their families, she taught women in Rwanda and Zambia to make jewelry which she continues to market in the United States.
The recipient of honorary doctorates and various tributes, Ms. Fisher has reached hundreds of millions of people around the world with her messages of courage, compassion, and urgency. Her 1992 keynote address entitled “A Whisper of AIDS” that was given at the Republican National Convention was reprinted in major media from the London Times to the Los Angeles Times, and featured in anthologies and rhetoric texts including the famed Chambers Book of Speeches. Of that landmark speech, Norman Mailer wrote “When Mary Fisher spoke like an angel that night, the floor was in tears and conceivably the nation as well…” Nearly 15 years later, when American political scientists were asked to rank the 100 most important speeches in 20th century America, they made Ms. Fisher’s Houston speech a consensus selection.

Mary has spent many years creating art that expresses her feelings as a mother, an artist, and a woman living with AIDS. Each piece bears a thought: about the world, about Mary’s children, about the children in Africa, or perhaps about the huge extended family she has adopted across the world. Words from her many speeches around the world are spread throughout her works, either in paper, cloth, or print. Each piece gives wings to Mary’s heart. Her works teach, inspire and provoke. Mary shares her journey through life as she creates – join her on that journey.
The AIDS virus “does not care whether you are Democrat or Republican. It does not ask whether you are black or white, male or female, gay or straight, young or old… HIV asks only one thing of those it attacks: Are you human?” Mary Fisher
www.maryfisher.com