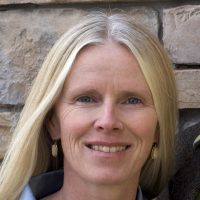 As designer and lead craftsperson I direct a skillful team to blow sizeable glass vessels. After they cool, I permanently carve imagery into them, using a sandblaster and diamond engraving tools. The challenging hot glass techniques we use provide me with several thin, transparent color layers which, when carved into, result in the myriad hues and shades of color which characterize my surface compositions. The finished piece is a highly personal, voluminous, sculptural narrative. The story travels the circumference, exploring the undulating curves in the form.

The imagery is a sensual and textural interpretation of a moment in time. Suggested in some of my recent works is the view one would have if sitting in the midst of a chaotic bramble of natural botanicals. I appreciate the interrupted light and intricate negative space formed by such groupings as well as the spatial and postural relationships amongst the plants, which I view as almost social. Though classically rendered, there is an animated quality to my carvings. This reflects the fantasy-like experience I often tap into when studying other life forms. The feelings I attempt to convey are at times romantic, surrealistic, or conversational.

Glass embodies many seductive qualities; I often make use of its delicate transparency and luminosity as well as its ability to hold fine detail. Carved glass is as easily transformed into the crisp, geometric divisions of a dried seed pod as into the tissuey, ethereal and translucent petals of that same plant in full bloom.

I enjoy the lifestyle of an independent artist carrying on the tradition of high-quality craftsmanship, making things with my hands from scratch. I believe that handmade items possess a great deal of humanity and I value this. I am satisfied when I am able to access previously unknown parts of myself, engage others, and make use of some of the mysterious qualities that glass has to offer.

Mary Mullaney began working in glass in 1984 at Southern CT State University under Peter Pelletieri and Chris Lubinski. Additional studies followed under Lino Tagliapietra, Lisabeth Sterling, and Kimiake and Shin-Ichi Higuchi. A long time active participant in her local art community, Mary has also taught and lectured at a variety of venues including Horizons New England Craft School and The Studio at the Corning Museum of Glass. Her award winning work is featured in numerous art publications and has been exhibited in galleries throughout the US and internationally since 1988.