I was born in 1936 in Onomichi, Hiroshima-ken, Japan on the inland sea. My father Masao inherited my grandfather’s kimono store and this is where I grew up. Because of his experience, my father dreamed that his only son should become a creative artist someday rather than succeeding him in “oldest son” tradition.

I studied art history and aesthetics at Kwansei Gakuin University from 1954-59. I graduated from the university with a B.A. in aesthetics. I attended the Otis Art Institue in Los Angeles from 1964-68, where I received a B.F.A. and an M.F.A.
Integrating reality with fantasy, humor with commentary, and history with the present became my challenge. My early watercolor paintings were inspired by Ukiyo-e woodblock prints. These paintings often focused on the clash of my two cultures- East and West. Series such as McDonald’s Hamburgers Invading Japan and 31 Flavors Invading Japan characterize some themes in my work of this time period. I was concerned about fast food homogenizing world tastes. Now we would say I was addressing cultural globalization, but this was the early 70’s- before that language or concept existed.

In the 1980s, my watercolors became large scale in an effort to depict the subject of AIDS, and I took my ukiyo-e derived paintings to a darker realm. Since the late 1990s, I have been producing large-scale narrative work addressing social and political issues, especially the abuse of children by priests. My recent large-scale paintings are inspired by Renaissance paintings but continue the narrative quality of Japanese woodblock prints.

I have been the subject of more than 70 solo exhibitions, many of which have traveled extensively, including those organized by the Whitney Museum of American Art in 1980; The Contemporary Museum, Honolulu in 1988; and the Yale University Art Gallery in 1998. In 1996 I was featured in a solo exhibition at the Arthur M. Sackler Gallery, Smithsonian Institution and in 1997 at the Asian Art Museum, San Francisco. 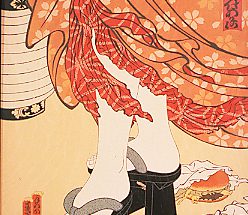