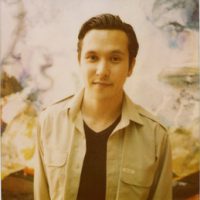 Born in 1982, Matthew Brandt obtained his MFA from UCLA in Los Angeles in 2008, where he still lives and works. His solo exhibition Matthew Brandt: Sticky/Dusty/Wet was exhibited at Virginia Museum of Contemporary Art in 2014 and previously Columbus Museum of Art, Columbus, Ohio in 2013.

Calling his approach “a little bit messy and experimental,” Matthew Brandt produces large-scale photographs through labor-intensive processes recalling the 19th-century origins of photography, often incorporating the physical matter of the subject itself. Attuned to the history of his medium—and its resolute physicality—and inspired by classical American landscape photographs, Brandt traverses the West, photographing and collecting material samples from nature and cities. Like early inventors Louis-Jacques-Mandé Daguerre and William Henry Fox Talbot, Brandt revels in the alchemy of image making, experimenting with the effects of various materials on the development process. He has produced rainbow-washed pictures of lakes by soaking them in their own water, and photographs of swarms of sparkling honeybees incorporating the bodies of the bees themselves. Through his work, Brandt poses a fundamental question about his magical-seeming medium: what is a photograph? 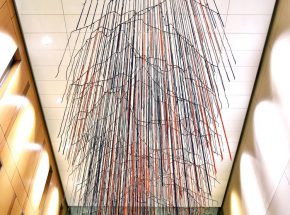