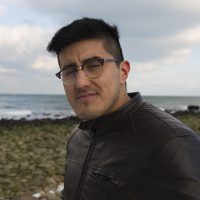 Inspired by the struggles and pain he and his mother went through, like many other immigrants and people of color, Max picked up a brush and set out on a mission. Drawing from the bold colors and flatness of traditional South American art, his paintings seek to tell stories and pay tribute to the people in his community that constantly have to deal with being considered second-class citizens because of the melanin in their skin and their country of origin.