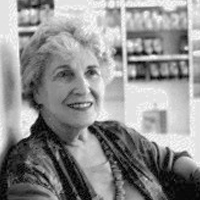 May Lesser was born in New Orleans, Louisiana. She was the third of four children growing up in New Orleans; a product of a moderately well-to-do Jewish family in post-Nazi World War II America.

Although education was highly stressed in her family of origin, her parents were sorry for the pressures that their first generation immigrant status had caused their children. They wanted May to live the life of a “lady”, and they were opposed to her aspiration to become a physician like her father. They were pleased when she graduated from E. Sophie Newcomb College for Women in Art, and later with a Masters of Fine Arts in Art History.

May married a physician, a pediatrician who later became a psychiatrist. She had four children, three of whom are physicians and one who trained as a special education teacher. Each of her children shares her love of art, psychological meaning, and medicine–which they inherited from their mother and father.

May’s work is well known, and has been collected and shown at foundations, museums, and galleries throughout the world.

The very large collection of work shown herein is representative of her work through her life. It spans her early portraits as a young woman, her increasing exposure to medicine through her joint interests with her husband, her interest and exposure to biblical studies and to dreams. Finally, her synthesis and portrayal of the current dilemmas and themes in contemporary medicine can be observed.