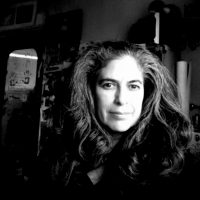 Máye Torres was born in Taos, New Mexico, in 1960. Nestled in the heart of the Sangre de Cristo Mountains, Taos is a small town steeped in the multilayered cultures of Native America, Old Spain, the inheritance of pioneering trappers, and the influence of more contemporary artists and businessmen. Torres’s heritage is a blend of all these, and her art reflects this melting pot of diverse people.

When she was a child, her father was a rural science educator and the family lived in El Salvador, Ecuador and Bolivia. There Torres was exposed to the lives of the Incan, Mayan and Aztec people, their art and concepts of the universe. She was also immersed in Old Spanish and European cultures and their politics. When they returned to Taos in 1976, the town had become a major hub of the U.S. art world. In high school she often assisted sculptor Ted Egri in his studio and began exhibiting her own art.

Torres earned a Bachelor of Fine Arts degree from the University of New Mexico, with an emphasis on studio art and science. As a National Honors Exchange Scholar, during her junior year in college, she went to Humboldt State University in Northern California, where she focused on lost wax casting and ceramics. Subsequently, Torres apprenticed with painter John Wenger, and with Light and Space artist Larry Bell.

During the past thirty years, as a professional artist, her art has been an exploration of global ideas from science to politics, mythology to social media, and cosmology to human emotion. Experimentation remains central to her process, as does the human form, which results in emotionally powerful artworks that turn her quest for universal and self-exploration back on the viewer. Torres is the mother of three sons, Isaiah, Zach and Matthias. This drawing, Samba Pa’ Tí, is a tribute to her love for her late husband, painter Rory Wagner. 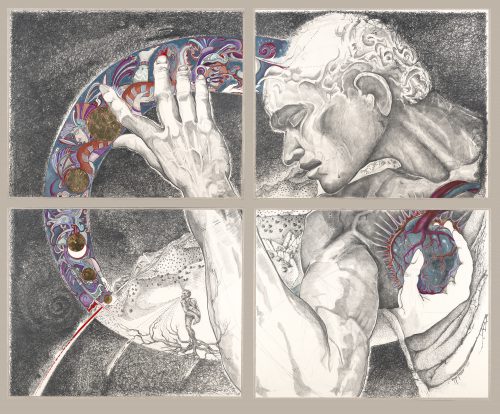 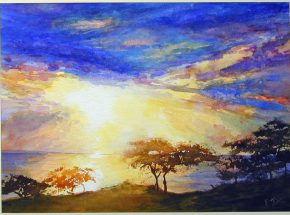