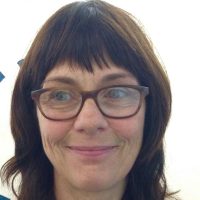 Meg Cranston (born 1960) is an artist who works in sculpture, painting and performance and as well being a writer. She has exhibited internationally since 1988. She received an MFA from California Institute of the Arts in 1986 and a BA in Anthropology/Sociology from Kenyon College in 1982. She also attended the Jan van Eyck Akademie in Maastricht, The Netherlands in 1988.

Cranston’s work came to prominence at the 1990’s in exhibitions such as Helter Skelter at Museum of Contemporary, Los Angeles and the 1993 La Biennale di Venezia. Her recent work has been shown at the Nuer Aachen Kunstverein, Aachen Germany, The Getty Museum of Art and the Museum of Contemporary Art and the Hammer Museum, Los Angeles, The Carnegie Museum, Pittsburgh, K21 Museum, Dusseldorf, and the ICA, London. She is the recipient of John Simon Guggenheim Memorial Foundation Fellowship, the Architectural Foundation of America, Art in Public Places Award and numerous other prize. Cranston co-edited, with curator Hans Ulrich Obrist, More Than You Wanted to Known About John Baldessari and has published numerous essays on art. Cranston is the Chair of the Fine Arts Department at Otis College of Art and Design.