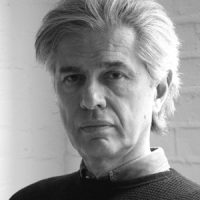 Mel Bochner (b. 1940) is recognized as the preeminent conceptual artist of the mid-twentieth century, with a career spanning five decades. Bochner is widely known for his text-and numbers-based oil paintings and charcoal drawings. He was part of a new generation of artists—like Robert Smithson, Donald Judd, and Eva Hesse—during the 1960s, a period rife with major societal and cultural change. Seeking to separate from traditional artistic practices and conventional styles like abstract expressionism, his artworks move toward exegetic and mathematical representations.

Bochner challenges the roles of art and language and how they are understood and constructed; language is the new form of pictorial expression and artistic imagery, with words in rainbow-colored compositions. His drawings also emphasize the circle as a major art form, and his sculptures investigate the scientific properties of measurement, weight, and gravity. Bochner forces the viewer to question how we receive and process types of information: “My feeling was that there were ways of extending, or re-inventing visual experience, but that it was very important that it remain visual…The viewer should enter the idea through a visual or phenomenological experience rather than simply reading it.”

Bochner earned a Bachelor of Fine Arts degree at the Carnegie Institute of Technology in 1962 and would later receive an honorary degree forty-three years later from Carnegie Mellon University, both in Pittsburgh, Pennsylvania. Bochner moved to New York in 1964 after briefly studying philosophy at Northwestern University, Evanston, Illinois. He first worked as a security guard at the Jewish Museum, where art critic Dore Ashton encouraged him to teach art history at the School of Visual Arts. Bochner’s acceptance would propel him towards a full-fledged art career. His works are housed in museums such as the Art Institute of Chicago, Illinois; the Carnegie Museum of Art, Pittsburgh; the Courtauld Institute, London, England; and the National Gallery of Art, Washington, D.C.