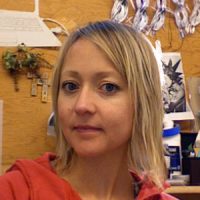 Melissa Dickenson is interested in the thought, knowledge and communication of mankind traveling through multiple numbers of physical devices at accelerated paces. The dynamics of globalization throughout history are the essence of her visual hybridity. Transforming the vehicles of knowledge exchange and images in nature are the methodology behind the construction of Dickenson’s artificial worlds. She uses ink, paper, cut Mylar, wires, organic forms, and technology to make installations. Melissa combines imagery of the obsolete (or soon to be obsolete) modes of equipment and drawings reminiscent of domestic nature together to form new kinds of hybrids. Dickenson creates a mixed species that connects to people’s daily lives.

Dickenson received her Bachelor’s of Fine Art from Maryland Institute College of Art in 2002. She has exhibited her work nationally at the Baltimore Museum of Art, the Rosenberg Gallery at Goucher College, Gallery Imperato in Maryland, Rodger Lapelle Galleries in Philadelphia, the Wattis Institute for Contemporary Arts and Thinkspace Galleries both in California, as well as Transformer Gallery and American University in Washington, D.C. Internationally, Melissa has shown her work at Youkobo Art Space in Tokyo Japan.

Dickenson is a recipient of Maryland State Artist Awards in both 2006 and 2008, as well as a finalist for the Walter and Janet Sondheim Prize for 2008 and Semi- Finalist for both the Bethesda Painting Award and the Trawick Prize in 2009. Most recently she was awarded an Artist Grant to attend Masia Can Serrat, Barcelona, Spain for fellowship in 2009.

Past exhibitions include ‘Exploration’ at Youkobo Art Space, Tokyo Japan, ‘The Walter and Janet Sondheim Prize’ at Baltimore Museum of Art, and ‘No Soul for Sale’ art fair New York, NY. Melissa’s work ‘Hybrids of Tutela,’ was featured in a solo exhibition in January at the Mclean Project for the Arts in Virginia. Dickenson’s work is part of the permanent collection of the Embassy of Sudan, Khartoum, Sudan. This fall Melissa looks forward to the publication of ‘Baltimore Counts’ an art book she collaborated on with Holland Brown Publishing.