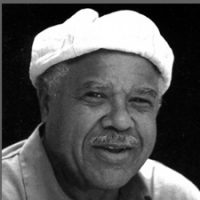 Mel Edwards is one of America’s foremost contemporary sculptors. Since 1965, when his first one-person exhibition was mounted at the Santa Barbara Museum of Art, Santa Barbara, California, he has been honored with more than a dozen one-person show exhibits and been in over four dozen group shows. He has had solo exhibitions at the Whitney Museum of American Art in New York City, the L. A. County Museum, Los Angeles, California, and the New Jersey State Museum, Trenton, New Jersey. A 30-year retrospective of his sculpture was held in 1993 at the Neuberger Museum of Art in Purchase, New York. Several of his works are in the permanent collections of the Metropolitan Museum of Art, New York City, the Museum of Modem Art, New York City, the Houston Museum of Fine Arts, Houston, Texas, and the L. A. County Museum, Los Angeles, California. His sculpture has been highlighted internationally in major exhibitions from Paris to Japan. In addition, me importance of his work has been recognized by his receipt of a Guggenheim Foundation Fellowship, a Fulbnght Fellowship to Zimbabwe, and through grants from the National Endowment for the Arts. His research into Third World visual culture has taken him to Morocco, Brazil, China, Cuba, and Nigeria.