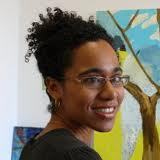 Mequitta received an MFA from UIC in 2003, mentored by Kerry James Marshall. Her work has been exhibited across the U.S as well as in Paris, Brussels, Berlin, India and Dubai. Mequitta has had solo exhibitions at the Museum of Contemporary Art Chicago’s 12X12, Lawndale Art Center in Houston, TX, BravinLee Programs in New York and Nathalie Obadia Gallery in Paris, France. Group exhibitions include: Global Feminisms at the Brooklyn Museum, Houston Collects African American Art at the Museum of Fine Arts Houston, Poets and Painters at the Ulrich Museum in Wichita, KS, “Undercover” at Spelman College Museum of Fine Art and Usable Pasts at the Studio Museum in Harlem. In addition to exhibition catalogues, Mequitta’s work has appeared in Modern Painters, March 2007 and Art News, February 2007. In February, 2010, Mequitta was profiled as an “Artist to Watch” in ArtNews. Holland Cotter, art critic of the New York Times, in his “last chance” article in the June 1, 2007 edition of the Times,sighting Mequitta’s NY debut exhibition Encounters, stated “Referring to the artist’s African-American and East Indian background, the pictures turn marginality into a regal condition.”

Mequitta was an awardee of the 2008 Houston Artadia Prize as well as a 2009 Joan Mitchell Award. Mequitta’s works are in many notable private collections. Public collections include the Ulrich Museum in Wichita KS, the Museum of Fine Arts Houston, The Philadelphia Museum of Art, The Studio Museum in Harlem, The Minneapolis Institute of Arts, The U.S. State Department’s Mumbai, India offices, and The Cleveland Clinic. In addition to her studio practice, Mequitta is responsible for the philosophy, structure and design of Blue Sky Project, an artist-in-residence program in Dayton, Ohio. Mequitta was a 2010 artist-in-residence at the Studio Museum in Harlem. Mequitta is self-represented in the United States and represented in Europe by Galerie Nathalie Obadia. Mequitta currently resides in Harlem.