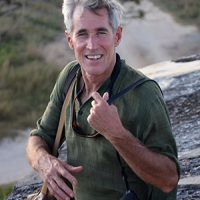 Michael JN Bowles is a critically acclaimed, award winning photographer whose career has spanned 30 years of work which has been exhibited and published internationally. Michael moved to the US in 1980 with his family after enduring a brutal civil war in Zimbabwe, leaving behind their family farm and arriving in the US with his family and little else. With Washington DC, New York and Sydney as home bases he built a career out of editorial, fine-art, and commercial photography as well as making short documentary films. He primarily works with 4×5 and 8×10 large format cameras and film.