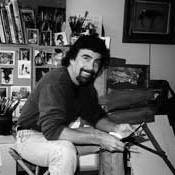 Michael has been painting for over 30 years. He creates strikingly beautiful and colorful canvases of Native Americans and their traditional ceremonies. The bold colors of the authentic costumes in his paintings are enhanced by the realistic expressions of the people he paints. While the overall rendering of the figures is realistic, he interprets the colors, texture and mood of his subject in a painterly, impressionistic style, thus bringing an emotional depth to his canvases.

This award-winning artist also enjoys painting interiors, still-lifes and market scenes. He exhibits in various invitational shows, including the Masters of the American West Show at the Gene Autry Museum.