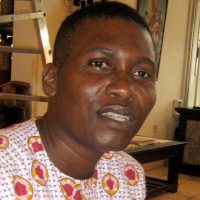 Painter Yves Midahuen (Midy) was born on 23 October 1967 in Porto Novo / Benin. From 1991 to 1997 he attended the art school Jika-Déco, a studio for advanced training in applied arts and crafts, which he graduated with a diploma for painting, graphics and decoration.

He got his initial impetus for creating professionally from training with Ludovick Fadairo, to whom he was apprenticed for several years. In artistic circles, Fadairo’s name bears with it a mark of distinction, as he is widely recognized as a master painter. In 1997, he founded his own studio ‘Midy-Arts’. Midy got further exposure from his academic training in Ghana. In 2000, he attended the College of Art at the University of Science at Technology in Kumasi / Ghana.

In 1997 he took part for the first time in an exhibition, the ‘Eveil Plastqiue’ in Benin. This was followed by a series of exhibitions in Benin, Ghana, Canada, Côte d’Ivoire, Togo (EWOLE5) and France. Yves Midahuen had his first own exhibition in 2000 as part of his advanced education at the College of Art in Kumasi. In the following years, their own exhibitions were held in Benin, Niger, Ghana and Nigeria.