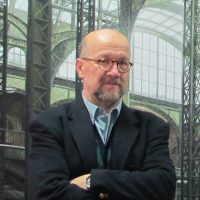 Milutin Dragojlovic is an accomplished painter and printmaker. He creates his photorealistic paintings with his deft handling of light and his ability to depict minute details with great accuracy. His Velika konstrukcija depicts an extremely detailed scene of the interior of the old Penn Station in New York (before its 1963 demolition). In Dragojlovic’s painting, the height and airiness of the space is emphasized He depicts the space as if seen from a low vantage point, with the soaring vaults extending beyond the painting’s borders. The golden light and soft edges in his painting are reminiscent of paintings from the Romantic era, and his celebration of this lost center of American life also evokes a Romantic sense of bittersweet nostalgia.