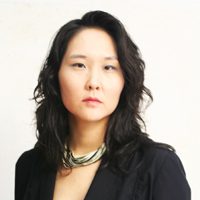 Mina Cheon (PhD, MFA) is a Korean-American new media artist and scholar who divides her time between Baltimore, NY and Seoul, South Korea. Cheon received her PhD in Philosophy of Media and Communications from the European Graduate School, European University for Interdisciplinary Studies, Switzerland, under the guidance of critical theorist Avital Ronell in 2008, and recently published her book Shamanism + Cyberspace (Atropos Press, NY and Dresden) in 2009. As an artist, Cheon has exhibited internationally what she calls her “Political Pop Art,” work that includes installation, performance, video, and interactive media. Cheon’s art addresses the relationship between media and political conflicts within Asia and Asia’s relationship with the Western world. Her projects have been shown in solo exhibitions at the Lance Fung Gallery, New York (2002), Insa Art Space, Art Council, Seoul, South Korea (2005), and C. Grimaldis Gallery, Baltimore (2008), and will be featured in a 2011 exhibition at The Sungkok Art Museum, Seoul, South Korea. Her artworks are in the permanent collections and/or archives of the Hirshhorn Museum, Washington, D.C., the SSamzie Art Museum of Korea, and EVR (e-flux video rental). Cheon was awarded the 2010 MLK Unity Week Award at the Maryland Institute College of Art (MICA) for her efforts to promote cultural diversity within and beyond MICA, where she is a full-time professor, teaching in fine art studio, new media, and liberal arts. Cheon also has two other terminal degrees: an MFA in painting from the Hoffberger School of Painting (1999), MICA and another MFA in Imaging Digital Arts from the University of Maryland, Baltimore County (2002). Her BFA is in painting from Ewha Woman’s University (1996), Seoul, Korea.