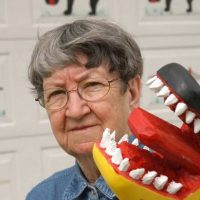 One of Kentucky’s best known artists, Minnie Adkins has been carving since she was old enough to hold a knife. Born in eastern Kentucky’s Peaceful Valley in 1934, Adkins is best known for her carved and painted animals — among them, red foxes, possums, black bears, and roosters. For decades, she crafted her carved masterpieces with her husband, Garland. The couple also became renowned as generous supporters of their neighbors who aspired to become artists, and even established an annual event to introduce and sell their works. This event, “A Day in the Country,” continues today and has become a celebrated pilgrimage destination for both collectors and budding artists. After a long struggle with cancer, Garland died in 1997. Minnie remarried recently and continues to serve as a mentor to the many talented emerging artists in her area of Appalachia. She has received numerous awards for both her carving talents and her philanthropic spirit, and she was featured prominently in the 1989 classic book “O Appalachia”, by Millard and Ramona Lampell.