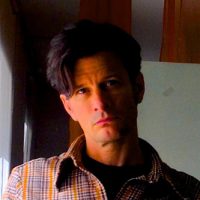 I believe that architectural structures act as both repositories and as vehicles for
memory by profoundly influencing culture and identity and by providing a tangible framework through which facets of a society can be expressed. I have been inspired to build a body of work dealing with how identity is influenced by the types of architectural edifices present in a given landscape. All must take into account the forgotten factory, asylum, or prison. Neglected, ignored, or often instilling rancor in the public, these buildings paradoxically offer one the most scintillating of subject matter: how beautiful the bitter pill. My work is not merely a method of documentation, but a visual forum where one may question what it is about these edifices that instills such emotion in people. While evidence of these pasts or present-day difficulties may not be pleasant, I feel it imperative that societies realize their impact on the past, present, and future concepts of identity and history.

Morgan Craig has exhibited throughout the U.S.A. Canada, Europe, and Australia, including OK Harris in New York City, SPACES in Cleveland, the Delaware Center for Contemporary Arts and the Australian National University. Craig has received numerous awards including, the Pollock Krasner Foundation Grant, the Elizabeth Greenshields Foundation Grant (2007, 2011), and the Pennsylvania Council on the Arts Individual Artist Fellowship for 2006 and 2008. He has also been invited to several residencies including, Cite Internationale des Arts, the Macdowell Colony, Bemis Center for the Contemporary Arts, and Proekt Fabrika in Moscow, Russia. During the fall semester of 2010, he was the visiting artist at the Australian National University. Selections from his work were recently featured in several solo exhibitions, including Marshall University, Emory and Henry College, and Penn State University. Last summer, he participated in a residency at Red Gate in Beijing. This past winter, a solo show of his work was on display in Utica, NY at Pratt MWP. Summer 2015 he participated n a residency in Yerevan, Armenia.