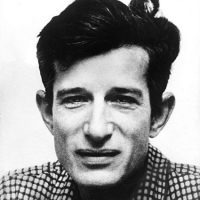 Morris Louis Bernstein was one of the talented U.S. abstract expressionist painters to emerge in the fifties. From 1929 to 1933, he studied at the Maryland Institute of Fine and Applied Arts on a scholarship, but left shortly before completing the program. He worked at various odd jobs to support himself while painting and in 1935 served as president of the Baltimore Artists’ Association. From 1936 to 1940, Louis lived in New York, where he worked in the easel division of the WPA Federal Art Project. During this period, he knew Arshile Gorky, David Alfaro Siqueiros, and Jack Tworkov. He also dropped his last name.

He returned to Baltimore in 1940 and taught privately. In 1948, he started to use Magna acrylic paints. In 1952, Louis moved to Washington, D.C. Living in Washington, D.C., somewhat apart from the New York scene and working almost in isolation, he and a group of artists that included Kenneth Noland were central to the development of Color Field painting. The basic point about Louis’s work and that of other Color Field painters, in contrast to most of the other new approaches of the sixties, is that they continued a tradition of painting exemplified by Pollock, Newman, Still, Motherwell, and Reinhardt. All of these artists were concerned with the classic problems of pictorial space and the statement of the picture plane.In 1953, he and Noland visited Helen Frankenthaler’s New York studio, where they saw and were greatly impressed by her stain painting Mountains and Sea (1952). Upon their return to Washington, Louis and Noland together experimented with various techniques of paint application. Louis characteristically applied extremely runny paint to an unstretched canvas, allowing it to flow over the inclined surface in effects sometimes suggestive of translucent color veils. The importance of Frankenthaler’s example in Louis’s development of this technique has been noted. However, even more so than Frankenthaler, Louis eliminated the brush gesture, although the flat, thin pigment is at times modulated in billowing tonal waves. His “veil” paintings consist of bands of brilliant, curving color-shapes submerged in translucent washes through which they emerge principally at the edges. Although subdued, the resulting color is immensely rich, In another formula, the artist used long parallel strips of pure color arranged side by side in rainbow effects.

He destroyed many of the paintings in this show but resumed work on the Veils in 1958–59. These were followed by Florals and Columns (1960), Unfurleds (1960–61)—in which rivulets of more opaque, intense color flow from both sides of large white fields—and the Stripe paintings (1961–62). Louis died in Washington, D.C., on September 7, 1962. A memorial exhibition of his work was held at the Solomon R. Guggenheim Museum, New York, in 1963. Major Louis exhibitions were also organized by the Museum of Fine Arts, Boston, in 1967 and the National Collection of Fine Arts, Washington, D.C., in 1976.