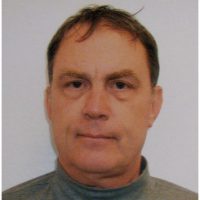 Moses Hoskins was born in 1953 in Iowa where he spent his youth and some time as an adult. He was educated in public schools and attended a few colleges in the Midwest before finally receiving a BFA from the University of Iowa School of Art and Art History. As a visual fine artist, his roots were in figurative rendering but his work later evolved into abstraction. He works in mixed drawing and painting media on paper often incorporating collage and on canvas. Residing in New York City since 1988, Hoskins has exhibited in a variety of venues. He is a 2010 and 2006 grant recipient from the Adolph and Esther Gottlieb Foundation and also twice from the Pollock-Krasner Foundation in 2006 and 1991. He was a resident at Yaddo in 2010. Interests include music and traveling.