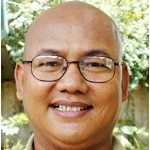 Born in Mandalay, Myanmar, Myat Kyawt studied under the artists U Nyo Pyar , U Tin Moe and U Khin Maung Sann, and attended evening classes in the State School of Fine Arts in Mandalay in 1989.
His technique is acrylic on canvas, and his whimsical, rather magical style captures religious and everyday images in an original manner. Looking careful at his paintings, you can always find his family – himself together with his wife and two sons – represented somewhere on the canvas.

He has had two solo shows, in 1997 and 1998, and has participated in more than nine exhibitions from 1996 until the present in Myanmar and also in Singapore. One of his paintings was chosen as one of the ’Jurors’ choices’ in the Myanmar Art Awards 2001-2002, and he was a finalist in the 2004 Myanmar Contemporary Art Awards.