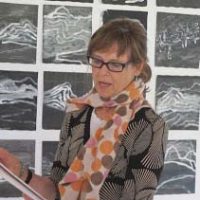 Nancy Manter was born and raised in the State of Maine and has been living and working for several years between New York City and Seal Cove, Maine. She is a painter and a photographer whose work is based on the elements of weather, the environment and landscape.

Manter’s work is included in several collections including the Whitney Museum of Art, The Guggenheim Museum, The Modern Museum of Art, The National Museum of Art, Washington D.C. among others. She is a recipient of the Verrazano Foundation Grant, A David Garner Project Fund-Princeton University, two New York Foundation for the Arts Grants and was both a nominee for the Tiffany Foundation and The Smithsonian Arts Fellowship and Anonymous was a Women Grant (TBA). Manter has received fellowships from McDowell Colony where she received the Chubb LifeAmerica Fellow Award, Ucross, Fundacion Valparaiso, Spain, Virginia Center for Creative Arts, The Heliker-LaHotan Foundation and the Fairfield Porter Art Week in Maine.