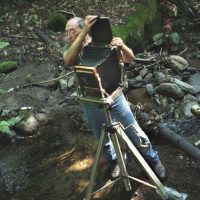 “I grew up in the Adirondacks and returned to photograph them when I was in my early forties. I always felt that the Adirondacks are part of the most northern extension of the mountain backbone that runs from the tip of South America to northeastern Canada. For this reason I am thrilled to see one of my Adirondack photographs on exhibition in Quito illuminating that visual connection. Interestingly, several of the Hudson River School Painters, the first group of truly American (U.S.) painters worked in the Adirondacks and then left to go to the Andes to continue their mountain paintings.

It is a special pleasure to see this work go to Ecuador because the brilliant artisans and technicians at Laumont Photographics in New York City who produce my work all have their roots in Cuenca, Ecuador. Now U.S. citizens, they include Benjamin Pelaez Vera, Angel Cobos Alvarez, and Jaime Pelaez Reinoso, and Willie and Hugo Vera Pelaez.”

Nathan Farb has been examining the Adirondack landscape for over fifty years. Combining romanticism with a probing naturalist’s eye, he is considered the preeminent photographer of this region. He has also published two books and many essays on the Galapagos Islands. His award winning coverage of the Yellowstone fires and Exxon oil spill for the New York Times Magazine established Farb as a leading interpreter of nature. Farb lived and worked in New York City for many years where he was well known for his avant-garde multimedia work, before moving back to the Adirondacks. His 1980 photographic essay on Soviet society, The Russians, was published as a book in five countries and in magazines throughout the world. His 2004 Rizzoli book, Adirondack Wilderness, is a collaboration with The Nature Conservancy. His works can be found in many public and private collections including MoMa in New York City.