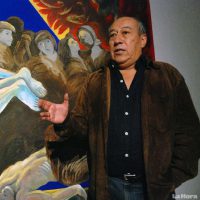 Nelson Roman was born in Latacunga in the Cotopaxi Province. His early influences included Indigenous rituals and dance. He says he was taken early with the colors of Ecuador – the green landscape, the blue of the sky, and in particular the colorful feathers of birds.

Roman studied at the Quito School of Fine Arts. His father was an artist – Roman’s early works were displayed in his father’s shop. He also began to work with popular Cotopaxi artists, including Alejandro Jacho, Jose Amable Olmos and Indigenous artist Teofilo Quishe (FYI – it means “Free Man” in the Quichua language). He studied Ecuadorian folklore through the Institutio Ecuatoriano de Folklore, and working with Brazilian Anthropologist Paulo de Carvalho Neto.

He became well known in Ecuador through the 1970’s, working with a group of three other artists calling themselves “Los Cuatro Mosqueteros” (The Four Musketeers) doing experimental art. The group launched their manifest: “La Ruptura del Yo Individualista” (The Fragmentation of the Individual Self). Your resident art critic (who has never even taken Art Appreciation 101) has no idea what this means – but I really like the idea of the “The Four Musketeers”.