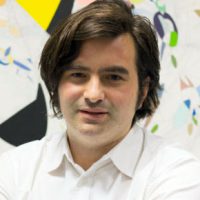 Nikola Savic’s paintings offer a refreshing reinterpretation of abstract art. Although he has been influenced by American art of the twentieth century, Savic works in a unique style that is reflective of the mechanical, industrialized modern world—a world in which very little is still handmade. His dynamic, colorful works, such as Golf, are made up of fields of color that are surprisingly devoid of depth or movement. As a result his paintings draw attention to the formal elements of color and line. At the same time, Savic’s flat areas of color work together in his paintings, seeming to hover or float, as if suspended in space. Thus, he successfully brings together opposing impulses.

A native of Belgrade, Savic earned his Bachelor of Fine Arts degree from the Belgrade Academy of Fine Art. He later studied at Central Saint Martins College of Art in London, earning his Master of Fine Arts degree. He has participated in many group and solo exhibitions across Europe. His work can be found in many public and private collections, including the Museum of Contemporary Art in Belgrade.