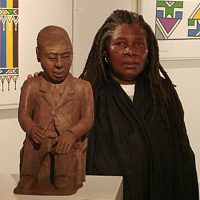 Noria Muelwa Mabasa is a Venda artist, who works primarily in the ceramic and wood mediums. Completely self-taught, Mabasa currently resides at the Tshino village in the Vuwani area of Venda, where she runs an art school in which she instructs her students in the art of clay-pot and sculpture making. She began working in clay in 1974 and two years later, in 1976, she became the first Venda woman to work in wood.

Mabasa has been a full-time artist since 1976 and much of her work is inspired by dreams. Her career was sparked by a recurring dream of an old woman, which she first had in 1965. The woman showed her how to work in clay; her first clay figures were small and were often given away to local children. At one time, Mabasa modeled statues to stand against the walls of the courtyard of her home, a practice which was shared by other women in the region, but, then, in response to a vision, she later began to make freestanding figures of policemen and Africkaaner pioneers for sale to white South Africans and foreigners. Her earliest figures were modeled after clay and wood matano figures used in domba initiation ceremonies. The latter style is very similar to that used by men for wooden statuary. Mabasa initially found recognition on both the national and international art scenes in the 1980s with her ceramic figures painted with enamel paint. Her naturalistic figures are coil-built and fired in an open straw fire. Her current work combines the figurative and the functional in more earthy ways; pots often take the shape of the female figure or feature faces.

Mabasa’s works deal mostly with traditional issues, particularly those pertaining to women, as well as subjects of Venda mythology and spirituality. Her wooden sculptures The Flood (1994) and Union Buildings (1999) are among her most famous pieces.