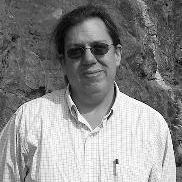 Native American artist Norman Akers creates works of art that act like maps of culture, of memory, and of place in the vaguest sense of the word. The intersecting lines that serve as the background for his images are clearly cartographic, but it is with the images placed on top of these maps that Akers creates forceful visual statements. As he puts it, “Through color, line, and visual form, I express deeply felt concerns regarding removal, disturbance, and the struggle to reclaim cultural context.” Further, he says, “Through visual narrative, I explore how my point of view relates to a historical, political, and cultural sense of place in contemporary society.”

Thus, Akers’s images have a cartographic value in suggesting the relationships between places, physical and cultural—of differing perspectives. Indeed, place is an essential concept in Akers’ work: “Sense of place, which is a primary concept explored in my work, can be interpreted in many ways. Place of origin describes the physical landscape where one lives or originates. Mythological place transcends physical place and describes the timeless spiritual or mythic origin where stories begin and civilizations emerge. History has left its mark on the land, creating a place where political and cultural boundaries define our identities. . . . Through layering of visual images that seem to coexist without any clear hierarchical order, I begin to convey a non-linear sense of time¬¬¬.”

Norman Akers was born and raised in Fairfax, Oklahoma. He is a member of the Osage Nation. He received a BFA in Painting from the Kansas City Art Institute in 1982, and a Certificate in Museum Studies from the Institute of American Indian Arts in 1983. In 1991, he received a MFA in Fine Arts from the University of Illinois, Urbana-Champaign.