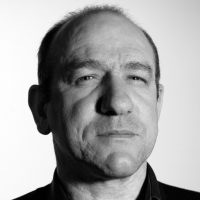 Olivio Barbieri is known for his large-format arial photography of major world cities. He creates what appear to be fantastical, unreal miniature worlds by photogrpahing actual urban environments from a helicopter. His technique, called selected focus, simulates a shallow depth of field with the use of tilt-shift lens photography. By tilting the angle of the lens to the back plane of the camera, he creates a gradual blurring at the top and bottom edges, or the sides of the filmed image. The arial image of a real city ultimately looks like a picture of a model, toy-like city, challengine the viewer’s expectation of what is real.

Barbieri studied photography at DAMS (Drama, Art and Music Studies) at the Faculty of Arts and Humanities of the University of Bologna. His work has been exhibited Venice Biennale, among other international exhibitions, and in galleries and museums throughout Europe, North America, and China. He lives and works in Milan.