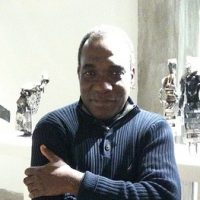 Nigerian artist Olu Amoda uses found objects to create new works that comment on mass production and consumerism while also alluding to history and memory. As Amoda puts it, “I am interested in the former lives of the objects I use and in the new meanings they take on when they are brought together.”

At first glance Tax Collector (Eye II) seems to be one large metal sculpture, but upon closer examination, the smaller pieces are revealed to be spoons. Once the viewer notices the spoons in the sculpture, they are almost impossible not to see. For Amoda, it is the small metallic pieces that comprise the whole of his sculptures that are essential. He is interested in the power of clusters of small objects. “What we call little things are merely the causes of great things: they are the beginning, the embryo and the point of departure, which generally speaking, decides the whole future of an existence,” says Amoda.

Amoda was born in Warri, Nigeria. He graduated in sculpture from Auchi Polytechnic in 1983, and was awarded a Masters of Fine Arts from Georgia Southern University in 2009. Amoda has worked as an Artist-in-Residence in Villa Arson in Nice, France (2000); the Bag Factory in Johannesburg, South Africa (2003); at the Appalachian Statue University in Boone, North Carolina (2006) and at the New York Design Museum (2010).

Amoda’s work can be found in many local and international collections including the New Ark Museum in New Jersey, USA. He has exhibited around the world, including the Museum of Art & Design, USA; the Didi Museum, Nigeria; the 6th Biennale de L’Art African Contemporain, Senegal and the Victoria & Albert Museum, UK. Olu Amoda is the founder of Riverside Art and Design Studios in Yaba, Lagos. He has taught Sculpture and Drawing at the School of Art, Design and Printing at Yaba College of Technology in Lagos since 1987. 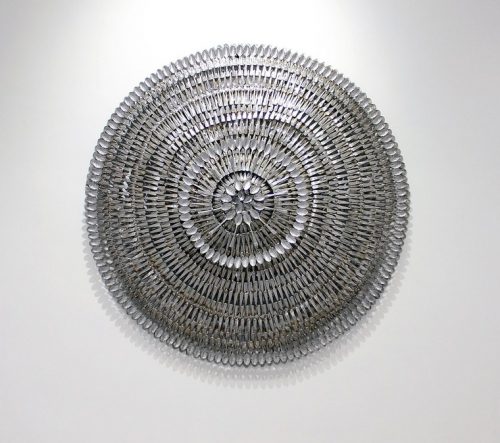