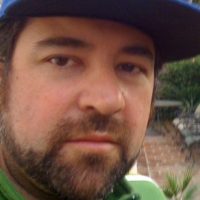 Growing up in East Los Angeles, surrounded by the sounds, smells, and colors of the community, Omar G Ramirez creates art like a hip hop musician produces beats. The dissection of images, politics, and sounds from various influences reappear in new contexts and forms to create iconography that speaks to a generation born from the culture of Hip Hop. Inspired by the images, politics, and cultures that influence “underdog” communities of Los Angeles, his work is a representation of the intersection where art, fashion, music, and politics emerge from within the “dangerous class” in American society to express an identity that is defined by the inequities of race and class. For the past two decades, Omar G Ramirez has established himself as an artist, musician, activist, and educator across the United States. He has collaborated with diverse communities to create site specific art installation across the US, produced music for film and musical performers; and developed curriculum where art is used as a tool for civic participation and activism.

As an artist, Omar G Ramirez signifies the individual struggle from a new generation of artists emerging after the civil rights movements in the United States carving out a place in Contemporary American Art. Influenced by Hip Hop culture, Omar G Ramirez began exploring art as a political tool during his years as an art student at the University of California at Irvine. As a traveling artist across the United States, he worked on public art pieces for diverse communities and began to explore the use of non-narrative story telling proposing that the viewer interpret culture, identity, and politics from a position normally dictated by others, but informed by the personal experiences from each viewer. Allowing him to explore more iconic imagery, Omar G Ramirez adopted a process of creating artwork that was researched based and began to “sample” from themes across time and culture. As he developed, his work began to explore various art techniques and genres in order to provide context to his work.

Using elements from popular culture, the civil rights era, and design elements found in Mexican society; his work explores the use of visual art techniques and styles associated with Hip Hop Culture. Elaborate use of motifs, word play, juxtaposition of Mexican and Hip Hop culture, as well as the use of Baroque styles are interwoven to express the beauty, tragedy, and drama found in the “underdog” or “dangerous class” in America in order to snatch interest from the viewer toward the subject matter of his work. As much as the producers of Hip Hop music “dig” for the obscure sounds and precise elements to be featured in musical compositions; the process that Omar G Ramirez explores is defined by the excavation, research, and ability to identify imagery and text that emerge as a single composition or a large body of work in his art. It is important to understand that his visual work is a product of his experiences as a musical performer and collector of vinyl recordings. As much as his work is defined by Hip Hop culture, Omar G Ramirez is shaping and providing a voice for those immersed in Hip Hop Culture and Art.