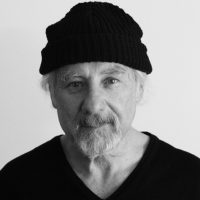 “Albert and the Electromagnetic Wave and Richard Feynman and His Diagrams are part of a series of paintings entitled Painted Physics. Einstein and Feynman experienced a time of deep insight and creativity. They were able to envision and describe the universe in a new way. They changed our understanding of time and space and predicted physical events no one had ever imagined. Much of what they discovered does not conform to everyday human experience. Their discoveries profoundly altered important aspects of culture, philosophical thought, religion, ethics and art.

Creativity and the desire to penetrate the mysterious connection between art and science. We stand in awe of great art and great science because they both create a sense of wonder and ask as many questions as they answer. They make us curious about the obvious and connect us emotionally and aesthetically to something larger than our own lives. Both Einstein and Feynman searched for truth, beauty and the mysterious. Both believed that everything in the universe is connected to everything else and sought to discover these connections.

Einstein and the Electromagnetic Wave refers to one of Einstein’s most famous thought experiments. As a teenager he tried to imagine what it would be like to ride on an electromagnetic wave. From such musings, the Special Theory of Relativity was born. According to the Theory, nothing can travel at the speed of light, so the scene depicted in the painting can never happen.

Feynman was a physicist, drummer, artist, safecracker and best-selling author. As a young man he worked on the Manhattan project and later in life contributed to an understanding of the Challenger space craft disaster. Although his diagrams, shown in Richard Feynman and His Diagrams, may look like petroglyphs created by an ancient civilization, they actually represent complicated mathematical calculations and describe visually how sub-atomic particles interact.”

Leibovitz was born in Philadelphia, Pennsylvania, USA and currently lives in Santa Fe, New Mexico, USA. He is a painter, photographer and curator. He thinks of the objects he creates as mirrors for people to look into and see some aspect of themselves. He often works on a series that contains underlying emotional and intellectual themes. Chance and random concepts sometimes play a part in the creation of his art.

In his most recent work, 2012 A Visual Diary, Leibovitz created a drawing/collage for each day of the year. These art works recorded his daily perceptions and emotions. He has participated in numerous exhibitions. Curatorial events created in his capacity as Art Director at the Santa Fe Complex include: Notions of Time, an intellectual, musical and visual inquiry into the nature of what we call time and Counterpoint, an exploration of the relationship between music and video art. The events included live musical performance, video art created specifically for the music, photography, film and short talks by scientists, poets and artists.