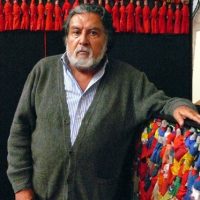 Oswaldo Viteri is a neo-figurative artist. Viteri gained recognition for his assemblage work but has worked in a wide variety of media including painting, drawing, printmaking and mosaics. He began his education as a student of architecture at the Central University of Quito in 1951. He worked in the workshop of Oswaldo Guayasamín and in 1959 Viteri assisted him on a mural commission for the Ministry of Public Works. During the 1960s he focused on painting and studying anthropology and folklore, In 1966, he finished his degree in architecture and Viteri was appointed director of the Ecuadorian Institute of Folklore. He began to explore more experimental techniques of art making incorporating collage and objects into his canvases. He made his first assemblage works in 1968 and appeared in his first “Happening” that same year in Quito. He began to exhibit his work internationally in the 1960s including the 1964 Bienale of Córdoba, Argentina, and the 1969 São Paulo Bienal for which he received honorable mention. His work became more sculptural in the 1970s such as his Multiples series of assemblage works that used rag dolls and other found objects. He has been twice candidate to the Prince of Asturias Awards.