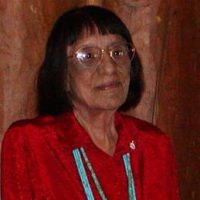 Pablita Velarde was born in Santa Clara Pueblo, New Mexico, to Marianita Chavarria and Herman Velarde, a farmer who was active in tribal government. She spoke only Tewa and was taught traditional Pueblo values and attitudes through stories told by elders. At the age of six, she was sent to Catholic boarding school in Santa Fe, and she later transferred to the Santa Fe Indian School, where she graduated. Two women who taught at the School particularly inspired her: Tonita Peña, a Tewa woman of San Ildefonso ancestry, and raised at Cochiti Pueblo; and Dorothy Dunn, a graduate of the Art Institute of Chicago and a former reservation teacher. In time, Velarde became recognized as a public spokesperson, and in 1960, with the release of her book, Old Father the Storyteller, she became the first Pueblo Indian woman to be published.

Over her seventy-year career, she was the subject of numerous exhibitions, and her work is in several private and public collections, including the Philbrook Museum of Art, Tulsa, Oklahoma, and the Museum of New Mexico, Santa Fe. She has always interpreted Pueblo life from a woman’s perspective, and has been an outspoken advocate of women’s rights, choosing themes that express women’s interests. As she once said, “Painting was not considered woman’s work in my time. A woman was supposed to just be a woman, like a housewife and mother and chief cook. Those were the things I wasn’t interested in.” Her unconventional life has given other women the courage to become painters, film makers, writers, sculptors, and historians. Velarde’s paintings represent the strength of Pueblo cultural identity to Indians and non-Indians alike. 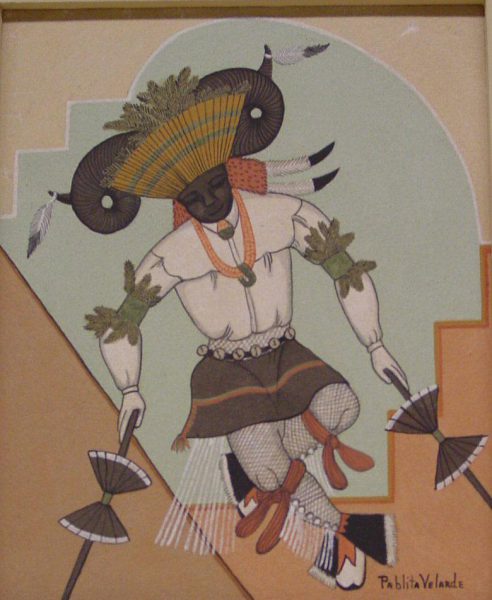 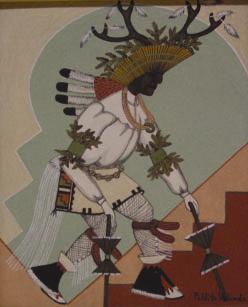