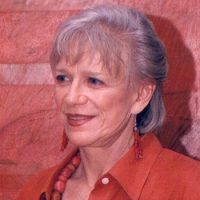 Born in 1932, Pat spent her childhood in Philadelphia, where she was first exposed to art in scholarship classes at the Philadelphia Museum of Art. Her family then relocated to St. Louis, Missouri where she graduated from high school and matriculated at that city’s Washington University School of Fine Arts in 1950. The University boasted a strong art department, where she was influenced by several now-legendary European emigrants, among them Philip Guston, Max Beckmann and Bauhaus artist Werner Drewes. Pat studied painting and printmaking, graduating with a Bachelor of Fine Arts degree in 1954.

In the 1970’s, Pat merged her personal and professional lives, as she became fully committed to the early environmental movement by helping conserve the last vestiges of the great Tallgrass Prairies which once covered one third of the North American continent. As an artist, she wanted her photographs to reflect the beauty, the history and the scientific value of this endangered landscape just as 19th century artists had done for places such as Yosemite and the Redwoods National Parks. She became deeply engaged in a long-standing effort to create a Tallgrass Prairie National Park in Kansas that would honor and sustain what little was left of this unique ecosystem. She was also concerned with preserving the culture of the prairie and honoring its Native American roots. These were pivotal times and Pat turned her talents and experience with photography towards a complete effort at recording everything she could about the prairie. Her work was now tuned to straight photography sustained by the goals of this important project. In her words, she tried to “marry ecology with art.” She also believed that if artists produce landscapes in any media, artists should educate themselves about every facet of that landscape. The landscape then becomes more than just a pretty picture. Pat spent the 70’s fighting the good fight with others of the same ilk and, ultimately, they were successful. Today, there is a Tallgrass Prairie National Park in Kansas, thanks to Pat and the many other visionary citizens who saw the value of saving this important piece of our collective history.

While the early 1990’s represented a return to painting, Pat continued to exhibit her previous work in photography. She was included in the invitational “Women in Photography International”, an exhibit that originated in Pacific Grove, California and traveled around the world in 1989 and 1990. She had solo shows at the University of Southern Maine and the Caldbeck Gallery in Rockland, Maine in 1990. Her show at the Caldbeck was reviewed by Philip Isaacson in the Maine Sunday Telegram, on September 9, 1990. He wrote “DuBose-Duncan is a brilliant colorist and an elegant draftsman. In her work, color does more than build form; it has a life of its own.”