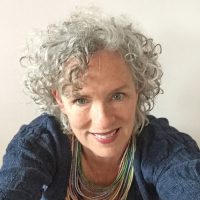 Pat Goslee is an intuitive painter whose work articulates the struggle between chaos and order, using color, pattern and layering. The painting “Enclave” is an attempt to represent a liminal space where, through abstract forms, she creates veils of awareness.

The concept of the border is very much in the zeitgeist. People continue to be categorized by their border status: native, settler, refugee, asylum seeker, migrant, alien, etc. But it is in the space of the border where we connect or disconnect. This painting suggests bridges, levees, turrets, walls, slides, gates, entrances and exits. The territory within these structures is the enclave — the water that connects us all. By defining space — or, in some cases, by breaking it up — both order and its opposite are referenced, alternately building up and breaking down the boundaries that stand in for human connection and isolation. Border spaces formed by the buildings around Goslee’s studio, which change shape daily with gentrification, are physical metaphors for this polarity. We live in a time of awkward change. In a sense, Goslee’s paintings are symbolic landscapes: topographies of the country we all inhabit in our dreams, where the unfettered mind is free to wander a terrain at once familiar and strange.

Based in Washington, D.C, Goslee has exhibited widely in commercial venues, universities, alternative art spaces and art fairs. Her work is included in the permanent collections of the US Embassy in Ethiopia, the US Embassy in Nepal, National Institutes of Health, the Children’s National Medical Center, the Wilson Building (DC City Hall), the Union of Concerned Scientists, as well as many private collections. Her video art is featured in the textbook Art 101: Understanding Visual Images in Our World, and her paintings are included in the publications 100 Artists of Washington, DC and 100 Artists of the Mid-Atlantic. She has served on the board of directors for the Washington Arts Museum (WAM) and the District of Columbia Arts Center (DCAC), and the art advisory committee for International Arts & Artists’ Hillyer Art Space. She holds an MFA in painting from Catholic University and a BFA in graphic design from the University of Georgia.

She has been awarded several Visual Artist Fellowship grants from the DC Commission on the Arts and Humanities.