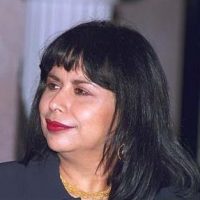 Patssi Valdez is a Los Angeles based artist who grew up in East Los Angeles. She received her BFA from Otis Art Institute in Los Angeles and was named outstanding alumni in the 1980s. In 2005, she was named the “Latina of Excellence in the Cultural Arts” by the U.S. Congressional Hispanic Caucus.

Valdez’s art has been featured at the Alma Awards and the Latin Grammies. She is the recipient of many prestigious awards, including from the J. Paul Getty Trust Fund for the Visual Arts, National Endowment for the Arts, and the Brody Arts Fellowship in Visual Arts. Her art work is in several major collections, including the National Museum of American Art, Smithsonian Institution, Washington D.C.; The Tucson Museum of Art, Arizona; The San Jose Museum of Art, California; and the El Paso Museum of Art, Texas.

Valdez is best known for her colorful paintings and early performance work with the avant-garde art group ASCO (Spanish for nausea). Her work is an expression of what is important to her. She states “My paintings portray an actual and or imagined place that depict an inspirational or emotionally charged feeling or experience. They are snippets of environments that I consider meaningful and symbolic of my individual as well as collective Chicano experience.”