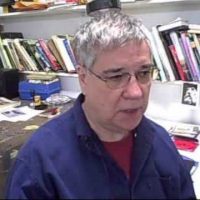 Cuban painter, active in the USA. He settled in Chicago in 1961 and studied at the Art Institute of Chicago from 1963 to 1966. His work from the 1970s showed his fascination with body language. The figures in these paintings mimic the mannerisms of early cinema, but by 1980 Sierra had shifted his attention to a kind of magical realism. His colours and spaces became radiant and expansive. Interested in dream images and paradoxes, he evoked different pictorial planes in his painting Two Rooms (1986; Chicago, IL, Gwenda Jay Gal., see 1987-9 exh. cat., p. 284), turning the depicted spaces into stagelike arenas where props, backdrops and real objects possess the same ontological status. With these devices he affirmed the illusive quality of pictorial space and the charm of theatrical forms of representation, which link him to such Latin American artists as Mario Carre?o and Fernando Botero, who also used metaphors of theatre to expand the power of their images; Sierra’s sense of colour and texture, however, are indisputably North American. He participated in such major group exhibitions as: Hispanic Art in the United States, organized by the Corcoran Gallery of Art, Washington, DC, and the Houston Museum of Art (1987); and a survey of Cuban ?migr? art from 1960, Outside Cuba/Fuera de Cuba, organized by Rutgers University, New Brunswick, NJ (1987).