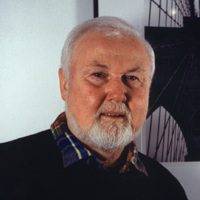 Born in Massachusetts, the artist moved to southern New Jersey at the age of fifteen and in 1961 enrolled in Salem Vocational and Technical Institute, where he studied scientific glass technology. After graduation he worked at companies producing glass instrumentation for scientific and medical usage. By the 1960s, he began making clear-glass animals and paperweights, eventually leaving his job in industry to become a full-time artist. In the 1970s, he developed a new three-dimensional form, the botanicals, which, by the end of the 1980s, became the exclusive use of his rectangular block format.

Stankard’s work is represented in more than twenty-four museums worldwide including the Smithsonian, the Louvre, and the Victoria and Albert, as well as innumerable private collections. Stankard has been the subject of a half-hour video documentary and the subject of the book Paul J. Stankard, Homage to Nature, by Ulysses Dietz (available in the NMA gift shop). In addition to remaining active in the international art scene, Stankard continues to teach at Rowan University.